In Butler County, the answer to that question is suddenly: “Quite a bit!” On several fronts throughout the county the safety of shale-gas drilling and fracking is being questioned, particularly in close proximity to schools and residences. Concerns are being raised, voices are being heard, legal issues pertaining to the PA Supreme Court's recent ruling re: Act 13 are being discussed. Bravo!

The following are news items related to issues with shale-gas drilling/fracking and the oil and gas industry that have appeared since our last newsletter.  There are a number of them.  It's amazing, the magnitude of issues attendant to this industrial process, and it can be overwhelming. Therefore, we urge you to take your time with these news items; unfortunately, they're not going anywhere... They have been arranged by category for your convenience. Go first to those categories which grab your interest; you can read the rest of them later. 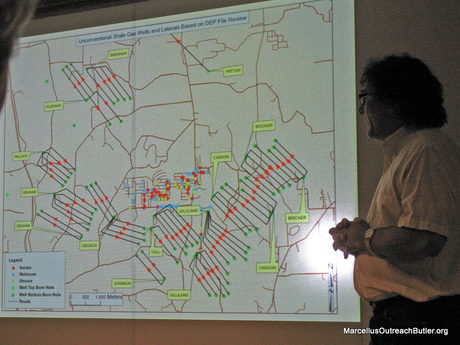 Dr. Stolz showing the laterals of the drilling sites around the Woodlands, Butler County, PA.
Dr. Stolz Discusses Woodlands Water Contamination
On Saturday, Apr. 26, Dr. John Stolz of the Center for Environmental Research and Education at Duquesne University presented a program at the Butler Public Library, sponsored by MOB, that explored the causes of water contamination in the Woodlands development of Connoquenessing Township.

For starters, Dr. Stolz was able to repudiate two key findings in Rex Energy's investigative report of the contamination incident which found Rex to be not responsible for the contamination. First, the Rex investigation said there was no difference in water quality pre- and post-drilling; Stolz showed DEP water reports that showed marked differences in water quality pre- and post-drilling. Second, Rex claimed that the areas of water contamination were uphill from their wellpads and so could not be contaminated by them, since “water flows downhill.” Stolz took a two-pronged approach to this argument: 1.) a wellpad location map superimposed on a topographical map showed Rex wellpads to be located on points of highest elevation in the area, and 2.) topographical features have nothing to do with the direction of subsurface water flow.

With a map that pinpointed residences with bad water or diminished water flow and residences with no water complaints, Stolz commented that sometimes residences with good and bad water can be right beside each other. The reason, Stolz explained, is difference in water-well depth. Water wells in the Woodlands area vary in depth from 62 to 900 feet. Thus two houses side by side could be tapping into vastly different and unconnected sources of underground water, depending on well depth.

Dr. Stolz informed us that the Woodlands is one of the most heavily-drilled areas of Butler County. There are 15 wellpads and 65 lateral gas wells within 2.5 miles of the Woodlands. There are also a number of abandoned coal mines and abandoned “legacy” gas and oil wells in the area. And therein, according to Dr. Stolz, lies the problem.

Stolz explained that the fracking of the 65 wells in the Woodlands neighborhood has involved 3 to 4 million gallons of water and 3 million pounds of proppant material per well, per frack, all injected into the earth at 10 to 12 thousand pounds of pressure per square inch. Stolz believes that this immense amount of pressure applied in a very short period of time has released contaminants from pre-existing wells and mines. That, along with casing failures that have been cited by the DEP for Rex wells in the area, could well have contaminated aquifers under the Woodlands.

While Dr. Stolz's research is ongoing, he states that the data thus far strongly suggests that drilling activity in the Woodlands area is responsible for the negative water changes experienced by several Woodlands residents. There are over 30 families from the Woodlands now receiving potable water from a volunteer water bank at White Oak Springs Presbyterian Church on Shannon Road. MOB wonders how much more data will it take for the county commissioners to allocate drilling impact fee monies to help these Woodlands residents to have good running water in their homes.