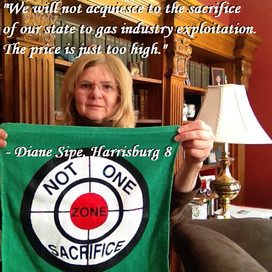 On January 20, 2015 - Hundreds of anti-fracking protesters disrupted Pennsylvania Governor Wolf's inauguration in Harrisburg, PA by chanting "Ban Fracking Now" loud enough that it was heard during the entire inauguration and also over the live stream of the event.

Eight of the protesters, including MOB's own Diane Sipe and Michael Bagdes-Canning, as well as our friend Maggie Henry from Lawrence County, were arrested for peacefully holding signs and chanting in the seating area that had been fenced off to protesters during Wolf's speech. They were charged with Disorderly Conduct and are now facing exorbitant fines between $300-$500 each.

Thanks to an online campaign on the indiegogo fundraising site, the Harrisburg 8 have reached and exceeded their goal of raising $3500 to cover the fines levied upon them by the State of Pennsylvania.  In the words of Harrisburg 8 member Greg Lotorto of Pike County: "They can try, but they won't silence us.  Ban Fracking Now."

Be sure to check out Spill Baby Spill -- MOB's ongoing report on significant leaks, spills and explosions associated with the allegedly "safe and responsible" oil and gas industry.