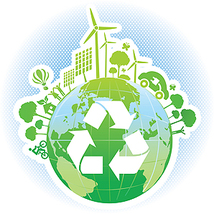 Toward a Clean Energy Future!
You may have noticed that Marcellus Outreach Butler (MOB) is not just an anti-fracking group; it is also a pro-clean energy group.  A few years ago MOB held an informal gathering to discuss our future directions.  One of the topics was how people were always telling us: "We need this gas."  How do we respond to that?  So we began focusing our efforts and research on renewable energy as well as the dangers of fracking... and today we can state with confidence: We don't need this gas...

As part of the lead-up to the March for a Clean Energy Revolution in Philadelphia on Sunday, July 24, MOB is currently focusing much of its energies and programs on the clean energy/climate change theme.  On Apr. 13, MOB co-sponsored a screening of Josh Fox's latest film, HOW TO LET GO OF THE WORLD AND LOVE ALL THE THINGS CLIMATE CAN'T CHANGE.  And on Apr. 23, MOB presented Power Up with the SUN in Butler County. (See editorial below.)  A bus from Butler County will be going to the March for a Clean Energy Revolution, and the Go Green Festival happens in September (see Upcoming Events for details).

MOB is part of the vanguard of efforts propelling the planet toward a clean energy future, and we welcome you to be a part of it, too!

Powering Up With The Sun In Butler County
Pennsylvanians Against Fracking (PAF), of which MOB is a member, has issued a statement opposing the Obama Administration's Clean Power Plan, saying that it not only lacks sufficiently aggressive measures for the "swift and just transition to 100% renewable energy," but it also "may well do far more harm than good," for the following reasons:

​As usual, our list of news items is extensive.  There is a LOT GOING ON!  Once again, take your time, peruse the categories, find those topics that most interest you and read them first.  Then take note of those you might want to come back to later.  The MOB newsletter is not meant to be read in one sitting!  But if you really want to, be our guest!!!

The March for a Clean Energy Revolution happens on Sunday, July 24 in Philadelphia, home of the Declaration of Independence and the U.S. Constitution, on the eve of the Democratic National Convention. The theme is to declare our independence from fossil fuels so we can be free to enjoy a healthy planet and healthy communities!  Come join the march!  MOB will have at least one bus leaving the Butler area early on the 24th for Philadelphia.  If you are interested, contact Meadow Meeder (724-816-4295) or Michael Bagdes-Canning (mbagdes@gmail.com) and ask for details.
Ongoing: Bird-dogging Governor Wolf!
Bird-dogging is a tactic that gets candidates and politicians listening and paying attention.  It has nothing to do with animals and everything to do with grassroots power in action. To bird-dog is to “observe, follow, monitor and/or seek out with persistent attention.”   When NY Gov Cuomo banned fracking, he came out of his office and a host of anti-frackers were there with Thank You signs.  Cuomo said to them: "Everywhere I went I heard you!"  This is what the PA movement needs to be doing. We can't allow Gov. Wolf to go anywhere without someone from the movement being there to demand that he Ban Fracking.  Information about Gov. Wolf's scheduled public appearances is usually posted on the PA Against Fracking website, or it can be found on the governor's website.  If you are interested in bird-dogging, contact MOB and ask to receive information re: bird-dogging events.  These can sometimes be fairly spur-of-the-moment, but definitely worth pursuing!  ​