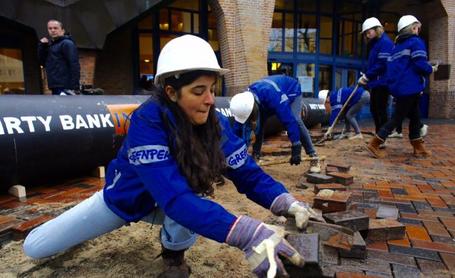 Greenpeace activists build a pipeline into ING's headquarters in Amsterdam to protest the bank funding the Dakota Access pipeline, 16 Feb 2017. Photo: @GreenpeaceNL / Twitter
On Feb. 16 a group of about 20 Greenpeace activists dug room for and planted 15 meters of super heavy pipe sections at the ING headquarters in Amsterdam. They did so to protest against the Dutch bank's part in financing the highly controversial Standing Rock pipeline in North Dakota.

After a parliamentary vote in January, Ireland could become the first country in the world to fully divest its sovereign wealth fund from fossil fuels.  Lawmakers split 90 to 53 in favour of ditching coal, oil and gas holdings from the €8 billion (US$9bn) Ireland Strategic Investment Fund.  The bill is expected to pass into law in the next few months after consideration by the finance committee.