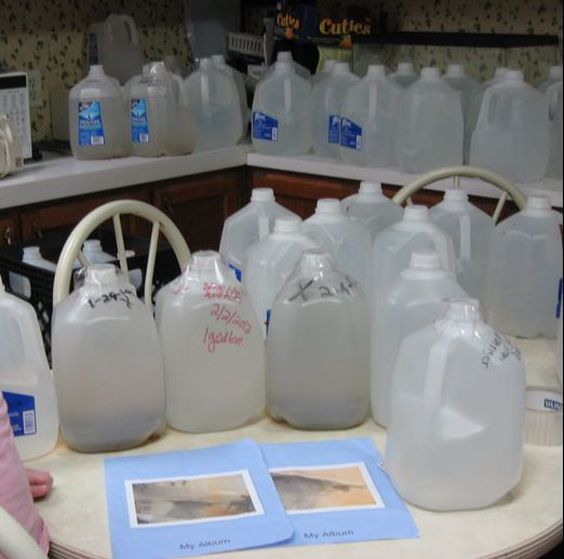 Well water contaminated by Rex's fracking in the kitchen of Kim McEvoy.
Imagine your family’s water suddenly turned orange, acidic, and smelled of rotten eggs. You couldn’t drink it, cook with it, bathe in it, clean or do laundry with it. Now imagine living with this scenario for seven years. A horror story? Yes, but a true one. Right here in Butler County, that’s exactly what has happened in the Woodlands of Connoquenessing Township. Seven years ago this coming January, the people of the Woodlands lost their only water source. Their wells were contaminated by Rex Energy’s nearby fracking, and they were sent scrambling for another source of water.
Despite numerous complaints to the Department of Environmental Protection (or, Don’t Expect Protection), it was “determined” that Rex’s fracking was not at fault. The residents were dumbfounded, knowing that their water was clean and clear before Rex’s arrival in the area in June 2010. The only change in the neighborhood was Rex, and there was no other plausible explanation. When the situation in the Woodlands emerged into the public light in late 2012, MOB immediately acted. In February 2013, MOB led a march and rally outside of Rex’s office in downtown Butler (which has since relocated to a private office park in Cranberry), collecting jugs of water for the residents in the bed of a pickup truck.
Dr. John Stolz, a microbiologist and director of the Duquesne University Center for Environmental Research and Education, determined in 2014 that the water quality of the well water in the Woodlands had indeed changed substantially after a two-year study. Stolz tested the water of 33 homes whose owners had reported changes in water quality or quantity after Rex began its fracking operations. Of those 33 samples, 25 showed high levels of manganese, a heavy metal known to be a component of fracking fluid, as well as a key ingredient of acid mine drainage (AMD). AMD is produced by highly acidic water dissolving heavy metals in abandoned underground coal mines, and the area around the Woodlands is known to be undermined. Stolz believes that the high pressures created by fracking forced the AMD to rise and contaminate the water table. If Rex hadn’t fracked, the water wouldn’t have been contaminated.
Fast forward to the present. After having been told by the DEP that Rex was not at fault, by Connoquenessing Township that they had no responsibility to replace the water supply, and by Butler County that if the residents wanted clean water they would have to pay for it themselves, all $490,000 of it, there’s still no water in the Woodlands. Meanwhile, for seven years, the only drinking water source for 50 families is the Water for Woodlands “water bank” run out of White Oak Springs Presbyterian Church. At times, the donation-funded water bank has run dangerously close to drying up, and is doing so again. The people of the Woodlands have been let down by all levels of government. Now, they only have their neighbors and friends to turn to. Please help the people of the Woodlands any way you can. You can donate via check or PayPal or sign-up for a time to help distribute water at https://sites.google.com/site/waterforwoodlands/. Thank you for whatever you can do, and please remember the Woodlands.

JACKSON TWP—MarkWest is poised to receive another Title V federal air pollution operating permit for the next expansion of their Bluestone processing plant on Hartmann Road, a mile from the Seneca Valley secondary campus. According to a legal notice published in the Butler Eagle, the expansion will consist of four 1680-horespower natural gas-fired compressor engines. Emissions just from this expansion will amount to, according to MarkWest’s estimates, 34.99 tons of carbon monoxide, 16.46 tons of nitrogen oxides, 30.76 tons of volatile organic compounds (which include benzene, toluene, ethylbenzene, and xylene), 3.97 tons of particulate matter, and 3.44 tons of undefined “Hazardous Air Pollutants” per year. Anyone wishing to comment on the issuance of this permit should write a letter to Eric Gustafson, Regional Air Quality Manager, Department of Environmental Protection, Northwest Regional Office, 230 Chestnut Street, Meadville, PA 16335. The letter should include your name, address, and phone number as well as the plan’s identification number, No. 10-368F.

BUTLER TWP—XTO began drilling another well on the Briston well pad on December 12. The pad is on Dutchtown Road, about a half-mile east of the BC3 campus and surrounded by predominantly residential areas.

BUTLER TWP—Work continues on a pipeline crossing Route 422 near the intersection with Greenwood Drive. It crosses Little Connoquenessing Creek and South Benbrook Road, before heading into Center Township.

PENN TWP—Rex began drilling on the Hofer well pad on Anderson Road on December 15. On the same day, Rex was issued a permit for an additional well on that pad.

CONNOQUENESSING TWP—Activity has picked up recently on the supposedly-completed Lesney well pad on 422 in Mount Chestnut, including the unusual unearthing of an existing pipeline that was completed and buried this past spring. A continuous flow of truck traffic has been seen accessing the site.

SUMMIT TWP—The Butler Area School District has determined that the water at Summit Township Elementary is safe to drink. After connecting the school to a Pennsylvania American Water line and replacing all of the pipes and fixtures within the building, two tests in November showed lead and copper levels were below safe levels. Students will return to the building after the Christmas vacation on January 3. Summit students were moved to Broad Street Elementary in the city of Butler last winter when water tests found high levels of lead in the water. It was determined that the well water had become acidic and was dissolving the lead pipes in the 80-plus-year-old building. It couldn’t be determined what had caused the water to become acidic, but some parents questioned if the Kozik Brothers well pad, which is a mere 700 feet from the school, could have been responsible. XTO, which operates the well, has denied any responsibility, but the risk of exposure to air pollutants as well as a fire or explosion on the pad still remains. Perhaps the BASD should have closed Summit for good and moved the kids to a safer location like Broad Street?

BERLIN—A well pad in rural Somerset County caught fire on November 30. The pad, which was drilled in 2009, caught fire at about 9 AM. Several homes were evacuated as a precaution. The pad is owned by Xtreme Energy, who determined that collection equipment on the pad failed and caught fire, but the well head itself was not damaged. The incident may have been worse had the Berlin Volunteer Fire Department not responded quickly. This just goes to show that even “safe” and “dormant” wells still pose a great danger. Read more here.

HARRISBURG—A new scientific study published in the journal Science Advances shows a very alarming correlation between proximity to fracking sites and low infant birth weights. Researchers analyzed more than 1.1 million births in Pennsylvania between 2004 and 2013. They found that mothers who lived within 1 kilometer (about .63 miles) from a fracking site gave birth to babies who weighed, on average, 1.38 ounces less than pregnancies that occurred 3 kilometers of more from a fracking site. Compared to those mothers who lived 10 miles or more from any well sites, babies born to mothers who lived within 3 kilometers of a well site were 25% more likely to weigh less than 5 ½ pounds at birth, which is medically classified as low birth weight. Read more about the study here.

HARRISBURG—The DEP has recently added iPads to its arsenal. Scott Perry, head of the Office of Oil and Gas Management, says that the gadgets will help field inspectors make and file inspections more efficiently. He also says inspections will increase overall and occur more regularly. That office of the DEP has decreased from 227 employees two years ago to 190 now. Read more here.