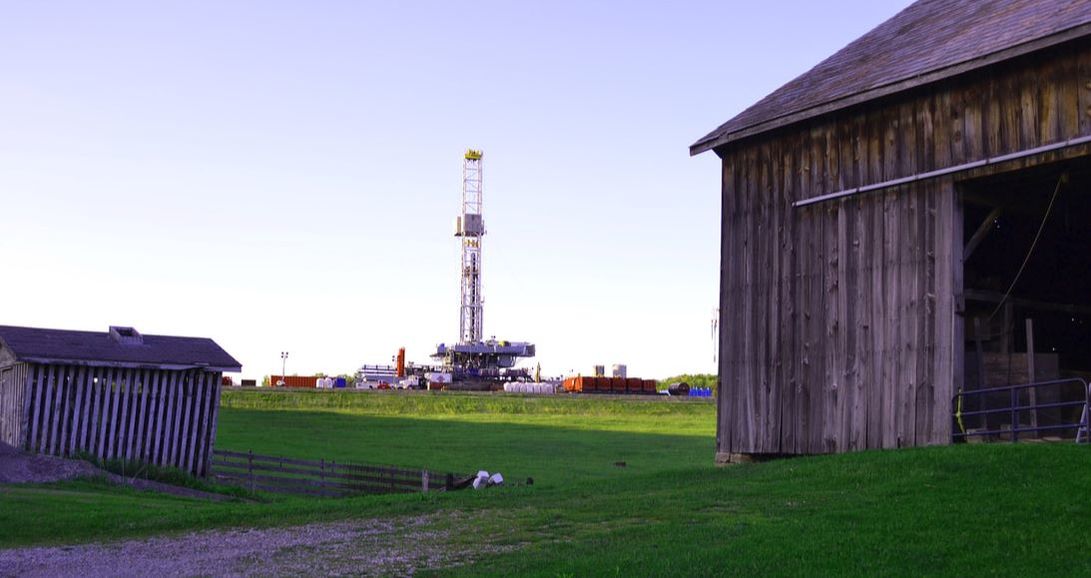 The Ursa Major well pad on Boydstown Road, just up the hill from the Oneida Valley Reservoir in Oakland Township. Photo by Michael Bagdes-Canning.
The northern part of our county is entirely rural, devoid of commercial development or sprawling tracts of houses. It remains heavily forested, much more so than the southern half of the county, interspersed with agricultural land. It is home to small towns like Eau Claire, West Sunbury, Chicora, and Bruin, as well as crossroads communities like Boyers, Hilliards, North Washington, and Forestville that aren’t even incorporated boroughs. Northern Butler County truly is the stereotypical “rural America.”
Up until now, this area has largely escaped the fracking onslaught that has been wrought in the southern half of Butler County. Of the six townships in Butler County that currently have no well pads at all, five of them are in the northern part of the county: Brady, Fairview, Marion, Parker, and Venango. The sixth is Cranberry. Three townships only have one well pad in the entire township, and again, are all in the north: Cherry, Mercer, and Worth. Bruin, Cherry Valley, and West Liberty boroughs all have significant land area, but not one of them has a permitted well site.
But all that seems to be changing. The primary operator in the northern townships is EdgeMarc Energy, based in Canonsburg. Their first area of concentration was Oakland Township, primarily around the Oneida Valley Reservoir, which serves as the drinking water source for over 30,000 people in and around Butler. This company, which intentionally and willingly threatened the drinking water for thousands, is now starting to move up Route 38. The first well pad in Parker Township and another in Washington Township are currently in the permitting stage (read more below). To add insult to injury, EdgeMarc seems to place the majority of its well pads in forested areas, not in open fields like XTO and Rex are wont to do (with exceptions, of course). Now not only are the groundwater, air, and surface waters being polluted, but our forest ecosystems are being devastated by large-scale clearing for pads, access roads, and pipelines. And what of the fracking tankers travelling Route 38 daily, mere feet from the water of the reservoir? I guess we better hope one never rolls, like they've done at least twice in the past year in Butler County.
This is likely only the beginning. New well permits have been trending northward for the past several years now, and unfortunately the northern townships are likely next. Already devastated by coal mining, logging, and oil drilling in the past, and still facing strip mining for gravel and sand today, these areas are going to face yet another environmental assault. It cannot be denied that these rural communities are largely forgotten, even by those elsewhere in the county. Far from the beaten path and not home to any attractions like shopping centers or parks, at least east of Route 8, northern Butler County is largely ignored by Butler, Cranberry, and Adams. It’s time to change that. If you live in northern Butler County, or know someone who does, and are concerned about fracking in your area, please reach out to us. You probably aren’t the only one. We may be able to help, and will do as much as we can. You can contact us at mpro113@gmail.com or via the “Contact Us” tab on our website. Marcellus Outreach Butler represents the entire county, not just certain areas, and we don’t want anyone to be forgotten. We hope to hear from you. 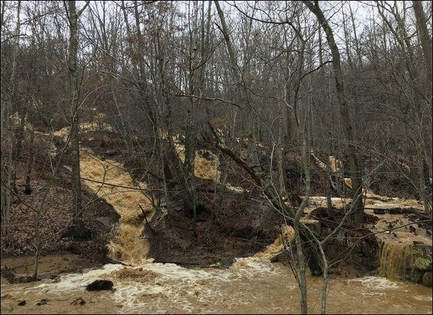 Photo: Submitted Photo/Butler Eagle.
BUTLER TWP—Neighbors of the Krendale Golf Course have reported receiving certified letters from Rex Energy inquiring if there were any old oil or gas wells on their properties. These letters were received in late February and early March, and are one of the earliest stages of drilling preparations. Rex is making progress on the Krendale well pad, but as of this writing, no formal construction permit has been issued by the township. Rex received its DEP permits last June. In a Butler Eagle article last October, Rex threatened to drill at Krendale within 12 months.

WINFIELD TWP—The township supervisors will hold a conditional use hearing for a proposed compressor station in the township. Pine Run Midstream has applied for a conditional use permit to build and operate a compressor station in the R/A (Residential/Agricultural) zoning district. The property, which is just under 108 acres of farmland, is located at 827 Winfield Road, Cabot, just east of the intersection with Bear Creek Road. The hearing will be at 7 PM, March 22, at the township building, 194 Brose Road, Cabot. In other news, Penn Energy recently received permits to construct two new well pads in the township, one on Bear Creek Road just south of Marwood Road, and the other on Marwood Road east of Spiker Road.

WASHINGTON TWP—EdgeMarc has applied to the DEP for permits to construct the Orion well pad on Parker Road, just east of Route 38. The well pad will destroy 25 acres of forest if approved, even though three neighboring properties are all at least partially clear already. The project required special clearance from the PA Game Commission and the U.S. Fish and Wildlife Service because dense forest is the habitat of the federally endangered Indiana bat. FWS approved the project only on the condition that any tree clearing take place between November 15 and March 31. One vertical well is planned for the pad as of this writing.

PARKER TWP—EdgeMarc has applied for another forest-clearing well pad, the Monoceros pad, on West Eldorado Road. Located right next to a massive compressor station that also belongs to EdgeMarc, this pad, too, required clearance from the Game Commission and Fish and Wildlife Service due to the Indiana bat. The same restrictions were imposed as the one above. This property was heavily logged before this well permit was applied for, so the damage has basically already been done. If approved, the pad will house six wells.

CONNOQUENESSING TWP—The torrential rains late last month caused the blowout of an abandoned underground coal mine on Boy Scout Road, according to DEP investigators. A nearby resident reported orange and brown water gushing out of a rocky hillside above Semiconon Run, a tributary to Little Connoquenessing Creek, on February 26. Harmony borough, which draws its municipal water from Little Connoquenessing Creek, shut off its water intake at 4 PM the day of the incident to prevent the contaminated water from entering the system. Based on the location of this mine, it is likely one of the mines identified by Duquesne University researcher Dr. John Stolz as the likely cause of the water quality problems in the Woodlands after Rex fracked in the area in 2010.

CONNOQUENESSING TWP—Rex received two more well permits for the Bloom well pad on Whitestown Road on February 23 and began drilling on March 2. On March 7, they received six more well permits for the same pad. In the past week, pieces of the large drilling rig for the horizontal portion of the well have been seen being moved to the pad. This pad, which was built in 2014, is located directly behind the Brandywine Village condos on Route 68 and already housed two wells.

FREEPORT—XTO has gone before the borough council to propose a well pad on the closed Buffalo Valley Golf Course. The Trilogy pad, planned to replace the seventh hole, would house four Marcellus wells and one Utica well. XTO plans to draw water for its fracking operations from Buffalo Creek, a high-quality trout stream and the focus of an Audubon Society conservation plan. XTO said at the meeting that they will need a zoning change from the borough (as if they have a right to decide that), and will inform the borough once they decide what zoning option to pursue. The owner of the golf course said he is still planning to build a 200-home residential development on the remaining 172 acres of the golf course. XTO received four well permits from the DEP on March 12, and told the borough they want to have the wells on line by the fall. Twenty people attended the meeting, but none voiced any concern or objection, and neither did the council. Read more here.

MONACA—The DEP has announced the dates and locations of the public hearings for Shell’s proposed Falcon pipeline that will feed the cracker plant under construction in Beaver County. The hearings will take place from April 3-5 from 6:30-8:30 PM each day. The first hearing will be held at the Central Valley High School Auditorium, 160 Baker Road Extension, Monaca, Beaver County. The hearing on April 4 will be at Burgettstown Area Middle/High School, LGI Room, 104 Bavington Road, Burgettstown, Washington County, and the final hearing will take place at Quaker Valley Middle School Auditorium, 618 Harbaugh Street, Sewickley, Allegheny County. Read more here.

JESSUP—A new natural gas-fired power plant under construction near Scranton already has some residents feeling sick. Resident Rella Scassellati reported a noxious, yellow-green gas was emitted from the plant’s smokestack over the course of four days, March 3-6. “I live a half-mile from the plant. It was burning my nose, throat, sinuses and chest,” she said. Chicago-based Invenergy is building the 1,480-megawatt plant, which will be one of the largest in the country when it goes on line next year. Dan Ewan, a spokesman for the company, said, “This temporary configuration results in both a visible vapor plume and audible noise. There are no chemicals used in these process, and the noise has been monitored and is within Borough noise ordinance limits.” The DEP is aware of the incident and is investigating. Read more here. 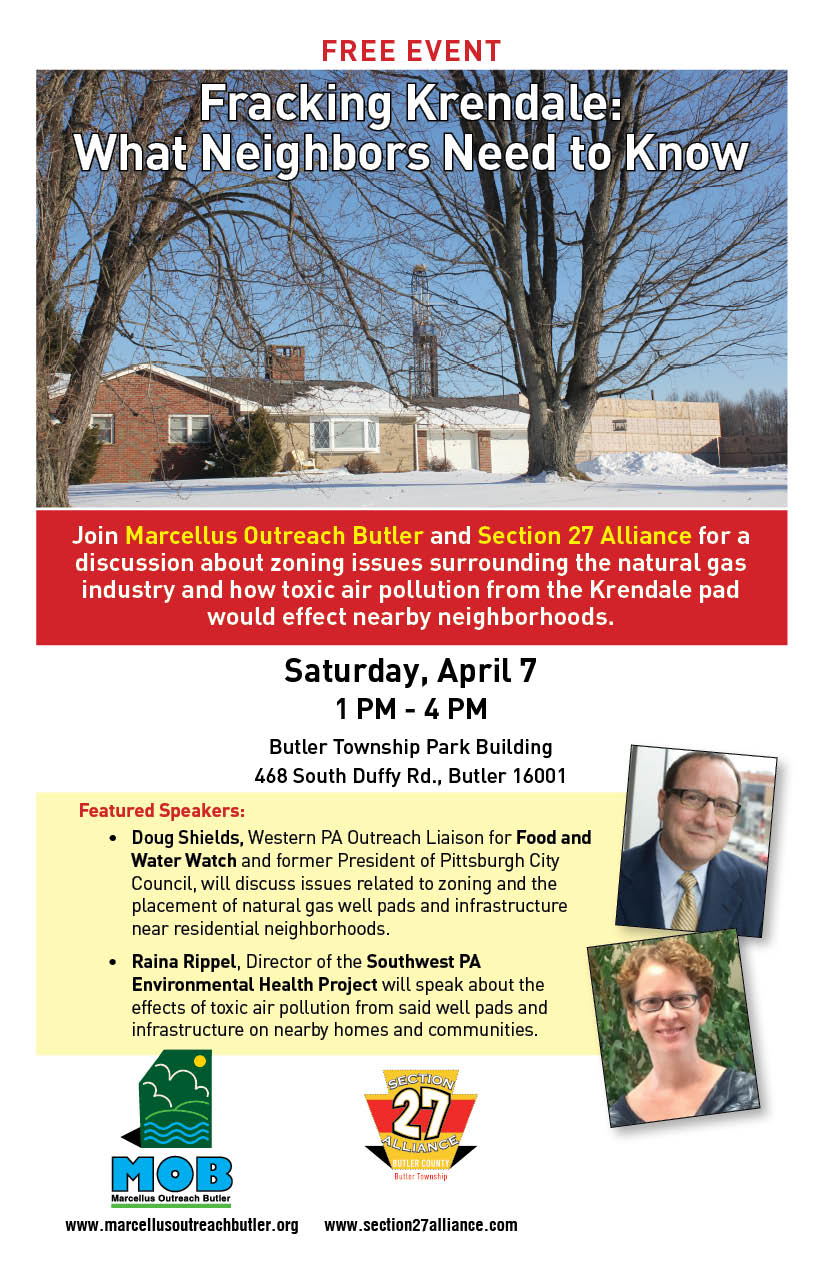