Every Day Is Earth Day 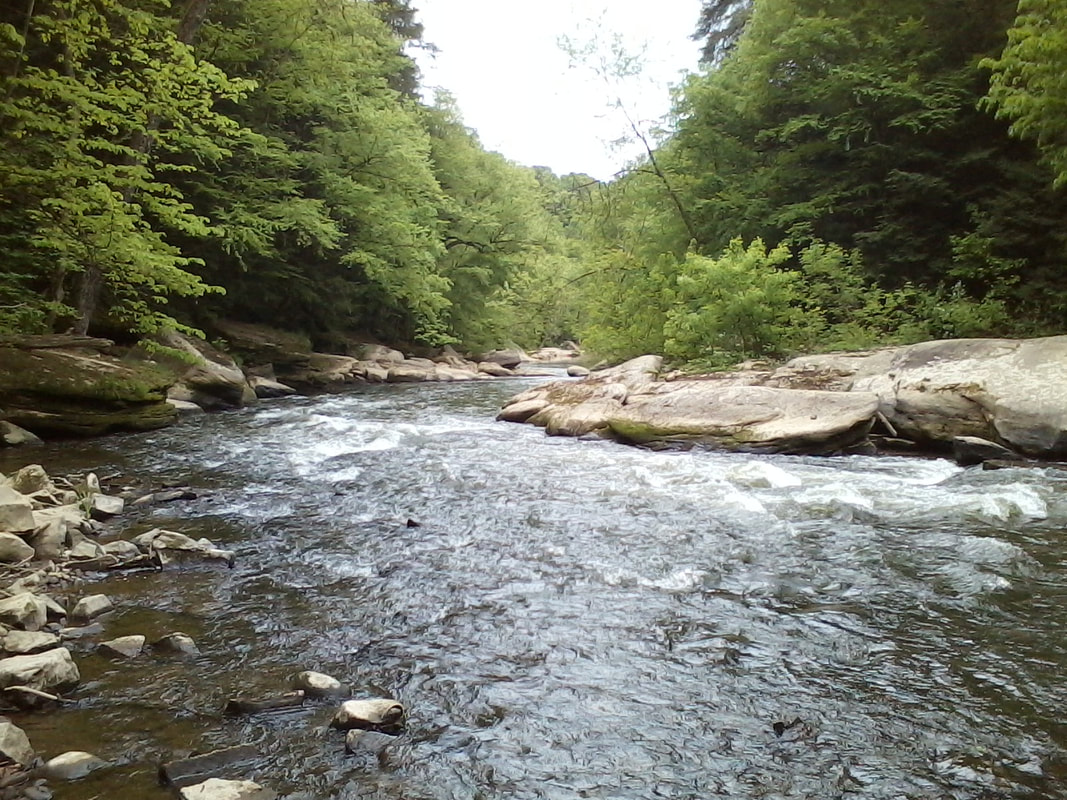 On April 22, the world celebrated Earth Day. You probably saw it marked on your calendar, either a paper one hanging on the wall like mine, or maybe on your phone or computer. What started as an environmental education event in 1970 has transformed into a sort of holiday. It has become culturally popular to take one day out of the 365 in the year (366 on leap years) to be conscious of the Earth. What started out as a rather urgent cry for awareness of the damage being done to this planet has morphed into a sort of feel-good day to “be green.” Sometimes, the whole week of Earth Day, or even the entire month of April, become an extension of the day. But for the most part, once the sun rises on April 23, that’s it for thinking or caring about the Earth for a vast majority of the populace. But in this age of climate change, the sixth mass extinction, and the numerous smaller-scale threats like fracking and mountaintop removal faced by people all over the globe, is that really enough? In 1990, John Denver, after he had largely faded from fame, released an album called Earth Songs. On it was a song entitled “Earth Day, Every Day.” And that is exactly what we need.
I will preface the following statements with this: if you’re reading this article, I’m not talking about you. Simply by reading this and keeping informed and educated about environmental problems, even if only in Butler County, you are doing much more than 75% of the people in this country. Now, on with the polemic. The idea of Earth Day in itself is a good one. It is better to have people care for one day than not at all. But considering the threats this planet, our home, is facing, it is no longer enough. Earth Day is often when we are preached at to reduce, reuse, and recycle; get rid of our incandescent light bulbs and put in those funny-looking neon things (and then replace those with LEDs); stop using plastic bags at the grocery store and take canvas ones with us; or turn off the water when brushing our teeth. But are these things really enough, or do they just make us feel good about ourselves? Where are the TV “breaking news” alerts and newspaper cover stories about climate change, fracking, mountaintop removal, tar sands, offshore drilling, deforestation, pipelines, industrial and agricultural pollution, urban sprawl, and other issues too many to count?  Where are the calls for activism? Why aren’t we being urged to stand up, take action, and fill the streets, municipal buildings, state capitols, and the halls of Congress demanding real, large-scale action?
I don’t mean to discredit individual action. Like they say, charity starts in the home. All action is meaningful. By all means, please buy organic, drive an electric car, put solar panels on your roof, grow your own garden, ride your bike, and do the things I already mentioned above if you are able. But if you’re one out of 10,000 people doing it, more needs to be done. In 1970, when the first Earth Day was held, we may still have had the luxury of time to fix what we, humanity, have done. Today, we don’t. Many scientists say that if meaningful, multi-national action is not taken to reduce carbon dioxide and methane emissions and transform to a sustainable, renewable economy by 2050, our collective coffin will be sealed. In case you’re wondering, that’s 32 years from now, a mere dot on the timeline of the Earth, and we’ve already wasted 48. The clock is ticking. How long until every day is Earth Day?

CONNOQUENESSING TWP—Connoquenessing Elementary School was evacuated on April 17 due to an odor of natural gas in the building. The students were evacuated at 10 AM and sent to the Intermediate High School in Butler Township. Peoples TWP was called to find the source of the leak, but inspectors were unable to find any leaking gas lines in or around the building. Peoples blamed the odor on nearby fracking operations and declared that it was safe (?) for students to return to the school, which they did at 1:15 PM. The distinct rotten-egg smell of natural gas is not naturally present in the gas, but rather is a chemical called mercaptan that is added before being sent into residential lines. However, Duquesne University biologist Dr. John Stolz says that some of the compounds present in “wet gas,” which is what lies under Butler County, give off a similar odor, so it is more than plausible that fracking is responsible. Rex Energy’s Shipley well pad is located a mere 1,750 feet from the school in Connoquenessing borough.

BUTLER TWP—Residents have recently reported hearing loud noises, seemingly coming from nowhere. Following an on-the-ground report on April 14, it was determined that the noise is emanating from the AK Steel A pad on Schaffner Road, located between the AK Steel plant and the Highfield neighborhood. The XTO pad, located on a property zoned single-family residential and surrounded by houses, is currently in the fracking stage. Residents over a mile away can hear it, likening the sound to a freight train going past. The noise is still occurring as of this writing.

PROSPECT BORO—XTO applied for permits for the first well pad within borough boundaries on April 18. The Coretsky well pad would be located on Crown Hill Road, just west of Route 528, south of the intersection of 528 and 488. If approved, the well pad would house two wells. It will be less than one mile from Moraine Elementary School and downtown Prospect.

SLIPPERY ROCK TWP—MOB hosted an electric car show on April 21 as part of the Macoskey Center’s Earth Fest at the center on SRU’s campus. Throughout the day, a Chevrolet Volt, a Chevrolet Bolt, a Honda Clarity Plug-in Hybrid, a Chrysler Pacifica Plug-in Hybrid minivan, a Tesla Model 3, two Tesla Model S’s, and even a 2003 Toyota RAV-4 EV were on hand for visitors to sit in and learn more about.

COUDERSPORT—JKLM Energy has withdrawn from a controversial frack-waste treatment plant at the headwaters of the Allegheny River in Potter County. The Pittsburgh-based company had proposed a plant next to the Coudersport municipal sewage plant that would have “treated” wastewater produced by fracking, and then release it into the Allegheny River, which at that point is no wider than our own Connoquenessing Creek. The Allegheny turns north and heads into New York for about 15 miles before turning back into Pennsylvania. The Seneca Nation reservation occupies almost the entire length of the New York part of the river, and they objected fiercely to the plan, which would have threatened their drinking water. JKLM’s voluntary withdrawal came after Coudersport borough council rejected the plan. Read more here.

PENN-TRAFFORD—A citizen’s group in Westmoreland County has filed suit to reverse a zoning ordinance passed in 2016 by Penn Township, Westmoreland County that designated special “mineral extraction overlays.” Protect PT has challenged the ordinance in Westmoreland County Common Pleas Court under Article 1, Section 27 of the Pennsylvania Constitution, which guarantees environmental rights to the citizens of the commonwealth. Dr. Anthony Ingraffea, an environmental engineer from Cornell University, was among the witnesses called by Protect PT, as were Dr. Ned Ketyer, a Pittsburgh pediatrician, and Tom Daniels, a land use expert from the University of Pennsylvania. Read more here.

LANCASTER—A new Franklin & Marshall College/StateImpact Pennsylvania poll shows that more people are opposed to fracking in Pennsylvania than in 2014. The new poll shows that 50 percent of respondents, no longer a majority, support fracking in Pennsylvania, while 42 percent do not.  However, 55 percent said that the environmental risks of fracking outweighed its potential economic benefits, while only 30 percent said the economic benefit outweighed the risk. Read more here.

MARIETTA—704 pounds of dynamite was stolen from a construction site for the Atlantic Sunrise natural gas pipeline in Lebanon County. Williams Partners, which is building the highly-contested pipeline in eastern Pennsylvania, reported that 16 cases of dynamite and 400 blasting caps were stolen during the weekend of April 14-15. The U.S. Bureau of Alcohol, Tobacco, Firearms, and Explosives is investigating and has offered a $20,000 reward for information leading to an arrest. Read more here. 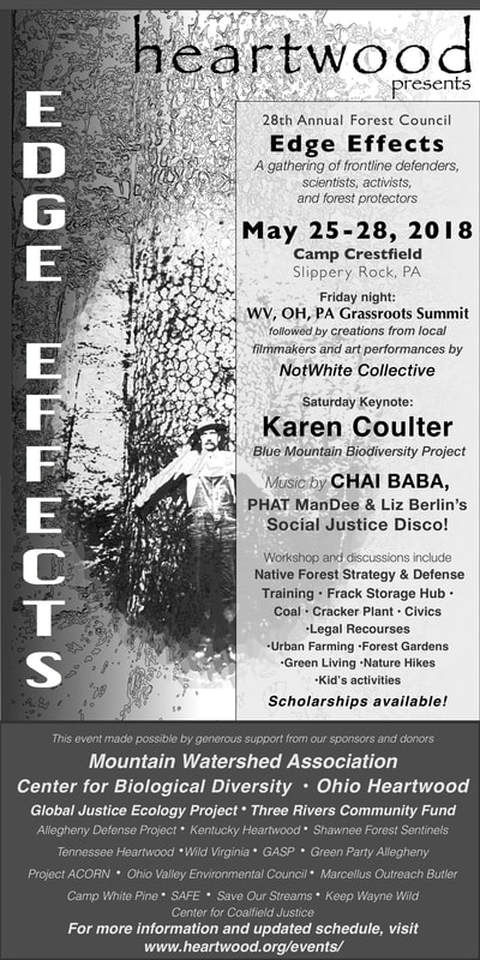 Marcellus Outreach Butler is a co-sponsor of the 28th annual   Heartwood Forest Council. Local activists are encouraged to attend.  There is a fee for the weekend, but activists from Pennsylvania, Ohio, West Virginia, and New York can apply for a scholarship to attend the council at no cost. Visit heartwood.org/2018-forest-council/ to view the schedule for the weekend, register to attend, and apply for a scholarship.