First the Boom, Now the Bust 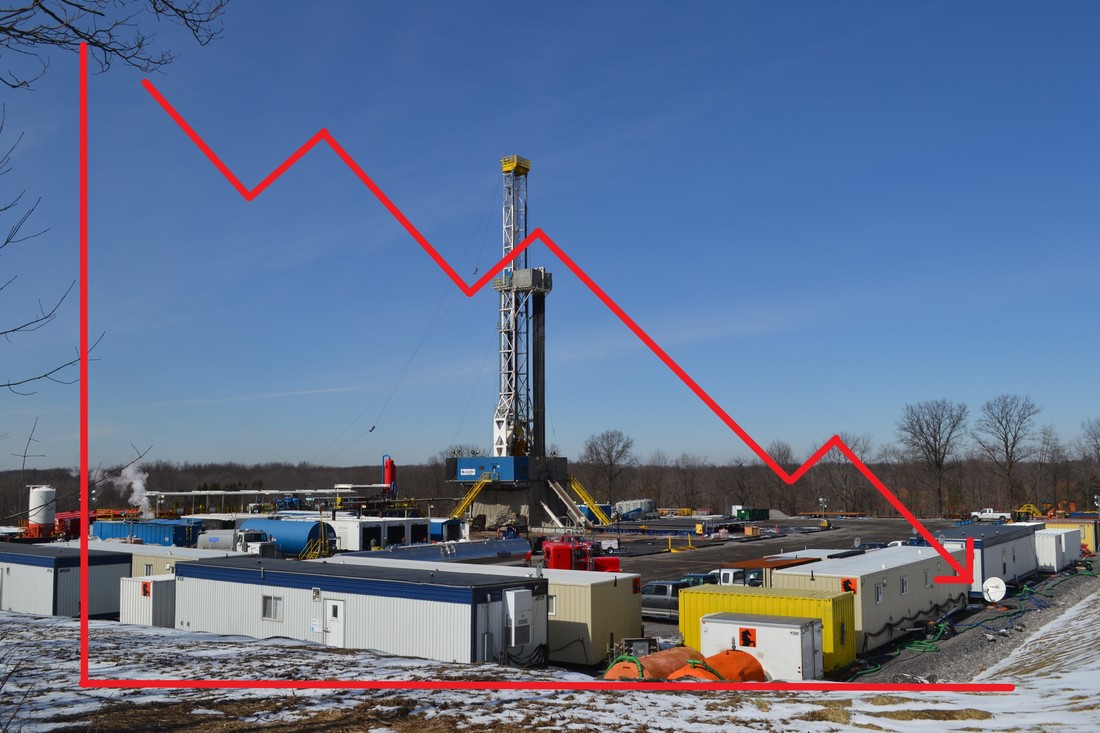 Photo by Michael Bagdes-Canning. Graphic by Sam Hoszwa.
On Saturday, June 2, Marcellus Outreach Butler hosted a presentation by John Detwiler entitled “The Financial Threat to Fracking” at the Butler Library. John, a registered professional engineer, has worked as a business executive and strategic consultant for the natural gas and electric utility industries, and is a former faculty member of Carnegie Mellon University. His presentation focused on how the fracking industry is slowly driving itself out of business with its reckless habits and exorbitant spending. Using actual data taken from the websites of Range Resources, EQT, and other drilling companies, John laid out the precarious situation that the fracking industry is in, and how its collapse could leave us worse off.
John’s program came in the wake of a hot topic in Butler County: Rex Energy’s recent filing for Chapter 11 bankruptcy. Many in the area are wondering what will happen if Rex ultimately folds, and if their situation is unique, or emblematic of the entire fracking industry. During the program, it seemed increasingly clear that Rex is not a unique case. The fracking industry as a whole is in a very precarious financial situation. Driven by an insatiable need for capital investment, these companies keep soliciting loans from lenders, driving themselves deeper into debt. The process of constructing a well pad and drilling the wells costs several million dollars, and most of that money is acquired from lenders and investors. Now that the initial gas boom of 2008-2012 flooded the market with a glut of natural gas and drove down prices, many companies are struggling to make sufficient money off new wells to pay back their investors.
Not only has the price of natural gas declined, but production has as well. Unlike other formations, production levels in the Marcellus Shale decline rapidly after the well is drilled. According to John, the production of an average Marcellus well declines by fifty percent in only four months, and can drop to as low as ten percent of initial production in as little as two years. Due to this downturn, the national active drilling rig count has declined from 1,600 in January 2009 to less than 200 in January 2018, and now much of the gas and its liquid by-products like butane and ethane extracted in our area are destined for export to Europe and Asia.
Are the gas industry’s financial hardships good news for those fighting it? Not necessarily. Like a wild animal, when backed into a corner, the fracking industry also lashes out in desperation. Pittsburgh-based driller EQT, as well as Encana Energy, are in the process of developing half-mile-long “super well pads” that can house up to 60 wells in a single location, tapping multiple formations in every direction. These types of pads may soon be coming to western Pennsylvania, which sits atop not only the Marcellus, but also the Utica and Upper Devonian shales. And if companies do begin to fold, who will be responsible for cleaning up their messes and maintaining their existing infrastructure?
We don’t yet know what the future holds for Rex Energy or other smaller operators in our area, but John Detwiler painted an uneasy picture. In its Oil Patch Bankruptcy report issued on March 31, 2018, Haynes and Boone, LLP, listed 144 North American oil and gas companies that have declared bankruptcy since 2015, resulting in $90.2 billion of secured and unsecured debt, and Rex has just joined their number. It seems that what started out as a boom is, like always, quickly going bust.

BUTLER TWP—According to information available on the DEP’s website, the 11 well permits for the Krendale well pad expired on June 21. If the operator does not drill within one year of receiving the permits, they expire and must be reapplied for. Now that Rex is in bankruptcy, it’s unclear when or if they will reapply. The company still has not applied for or received construction permits from Butler Township, and no work, including surveying, has been done at the site as of this writing.

JEFFERSON TWP—Drilling has begun on PennEnergy’s W71 well pad next to the Knoch School District campus on Dinnerbell Road. A nearby resident has reported very loud noises, almost entirely at night, keeping him awake and causing non-nocturnal birds to sing and chirp in the dead of night.

BUTLER TWP—Fracking is occurring on the Briston well pad on Dutchtown Road. A passing motorist has observed loud noise, vibrations, and bright lights on the well pad surrounded by residential areas. This is the second well on the XTO pad.

FRANKLIN TWP—Pipe is being laid on the pipeline that will link XTO’s Cratty well pad on Election House Road with its Kyne well pad on Dick Road in Connoquenessing Township. The pipeline crosses 422 near the Longhorn Corral bar.

WEST LIBERTY BORO—The 28th annual Heartwood Forest Council occurred over the Memorial Day weekend at Crestfield Camp in West Liberty, just south of Slippery Rock. Forest advocates from across Pennsylvania, as well as Florida, Illinois, Indiana, Kentucky, Maryland, Ohio, Oregon, Tennessee, Virginia, and West Virginia, converged in northern Butler County to examine the impacts of fracking and its infrastructure on forests and waterways in western Pennsylvania. MOB was a co-sponsor of the Forest Council and participated in a tri-state panel discussion, attended workshops with other activists, and led a fracking tour of the western and southern parts of the county, including the Woodlands, the Bluestone plant, and the Cratty well site.

PITTSBURGH—On Monday, June 18, a coalition of environmental groups held a protest outside the DUG East Conference being held in the David L. Lawrence Convention Center. The Paddle Against Petro protest included a unique aspect out of the playbook of West Coast activists: a “kayaktion” on the Allegheny River. The small flotilla of kayaks, rafts, and motorboats, similar to a protest several years ago in Seattle where hundreds of activists used kayaks and canoes to block a Shell drilling platform from leaving for the Arctic, was the brainchild of a tri-state coalition of groups called No Petro PA. Groups from Pennsylvania, Ohio, and West Virginia, including MOB, gathered to voice opposition to the gas industry’s plan to build a series of petrochemical plants in the Ohio River valley and to let them know that our region deserves a better future. Shell’s cracker plant in Beaver County represents the beginnings of this plan to turn the Ohio Valley into another “cancer alley,” a swath of petrochemical plants and refineries along the Texas and Louisiana coasts. Read more here.

HARRISBURG—The Pennsylvania Supreme Court has issued its long-awaited ruling on the Gorsline case. The case, brought by homeowners in Fairfield Township, Lycoming County, contested the township’s ability to permit fracking in a residential-agricultural zoning district. Fairfield Township has asserted that the wells proposed by Inflection Energy represented a “public service” that benefits all residents, similar to an electrical substation or sewage pump station. The Supreme Court rejected this assertion, but also did not deliver the sweeping ruling many were hoping for. The court specifically ruled that a conditional use permit is not sufficient to allow fracking in a residential-agricultural zone, a zoning type common in Butler County. Rather, the township must amend the ordinance to specifically allow fracking in that zoning district. Justice Christine Donahue wrote in the majority opinion that the ruling “should not be misconstrued as an indication that oil and gas development is never permitted in residential/agricultural districts or that it is fundamentally incompatible with residential-agricultural uses.” It is unclear what this ruling means for similar zoning-based challenges to residential-zoned well pads in our area, including the Krendale well pad in Butler Township. Read more here.

Amity and Prosperity: One Family and the Fracturing of America
By Eliza Griswold (Farrar, Straus, and Giroux; 2018)

“In Amity and Prosperity, the prizewinning poet and journalist Eliza Griswold tells the story of the energy boom’s impact on a small town at the edge of Appalachia and one woman’s transformation from a struggling single parent to an unlikely activist.
Stacey Haney is a local nurse working hard to raise two kids and keep up her small farm when the fracking boom comes to her hometown of Amity, [Washington County] Pennsylvania. Intrigued by reports of lucrative natural gas leases in her neighbors’ mailboxes, she strikes a deal with a Texas-based energy company. Soon trucks begin rumbling past her small farm, a fenced-off drill site rises on an adjacent hilltop, and domestic animals and pets start to die. When mysterious sicknesses begin to afflict her children, she appeals to the company for help. Its representatives insist that nothing is wrong.
Alarmed by her children’s illnesses, Haney joins with neighbors and a committed husband-and-wife legal team to investigate what’s really in the water and air. Against local opposition, Haney and her allies doggedly pursue their case in court and begin to expose the damage that’s being done to the land her family has lived on for centuries. Soon a community that has long been suspicious of outsiders faces wrenching new questions about who is responsible for their fate, and for redressing it: The faceless corporations that are poisoning the land? The environmentalists who fail to see their economic distress? A federal government that is mandated to protect but fails on the job? Drawing on seven years of immersive reporting, Griswold reveals what happens when an imperiled town faces a crisis of values, and a family wagers everything on an improbable quest for justice.” -from the publisher